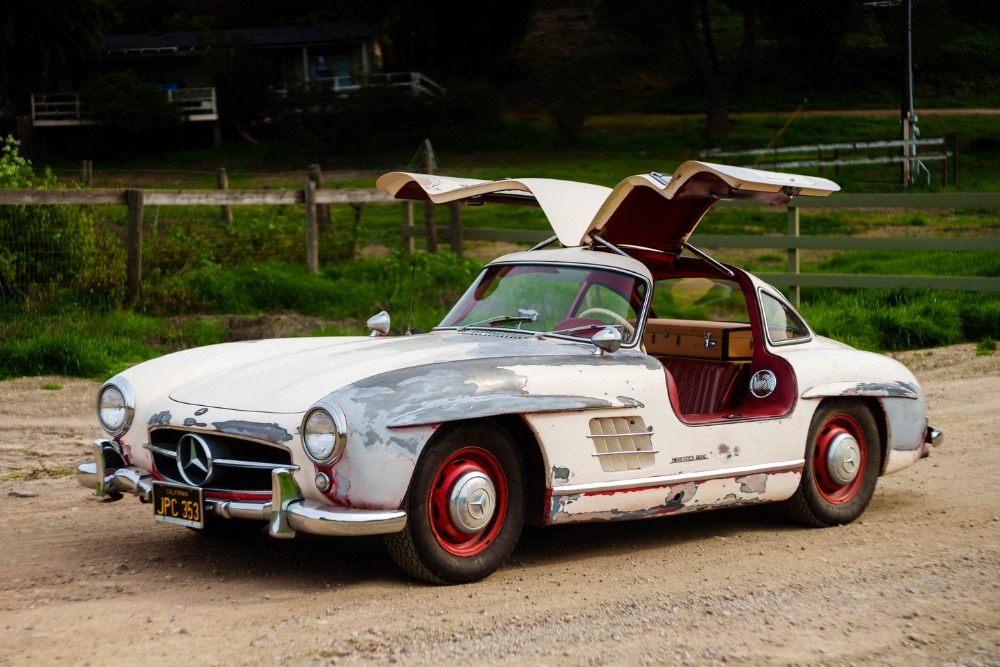 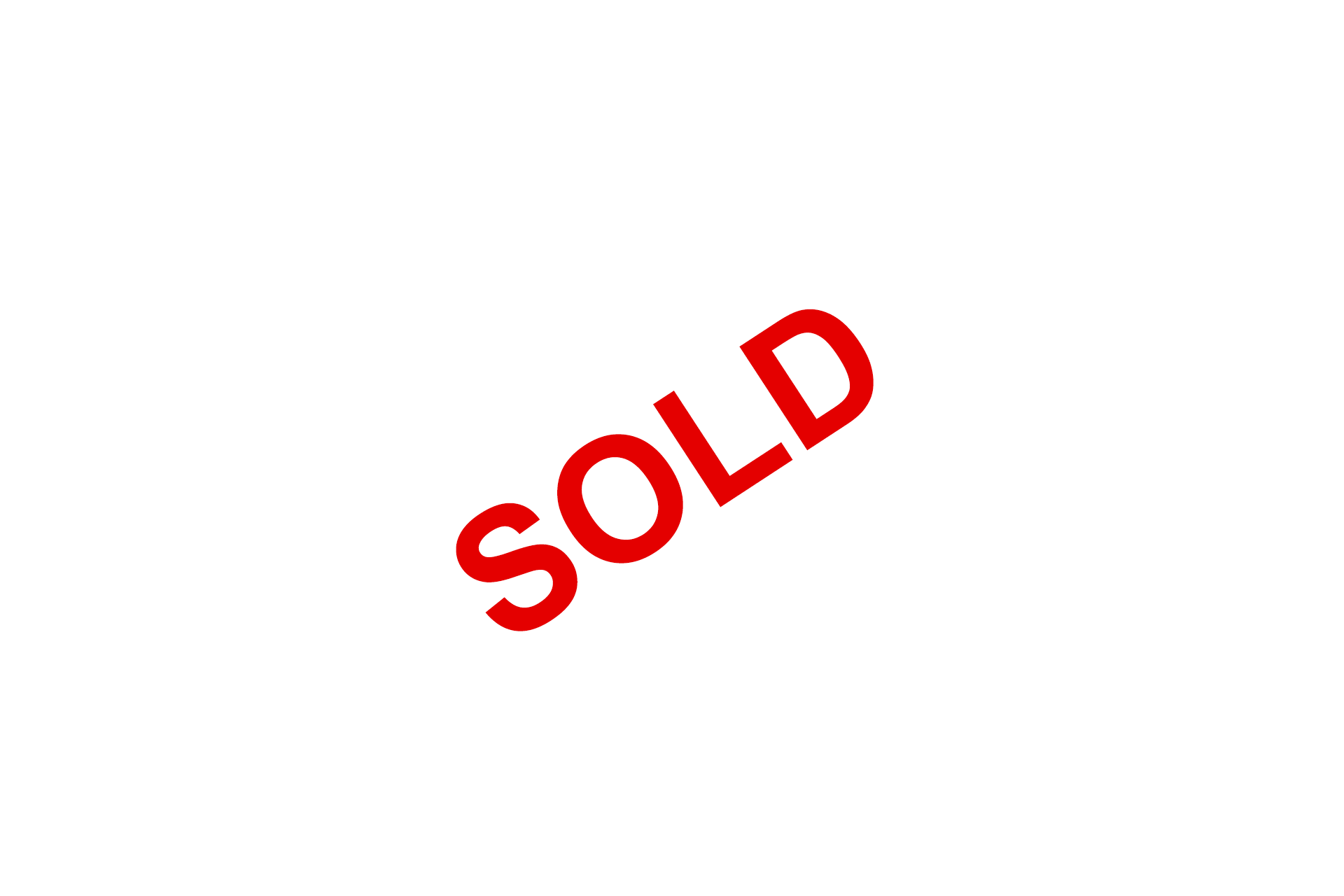 A Gullwing Sequestered for Decades and Essentially Unknown to the 300 SL World:
When a desirable sports car emerges from hiding, it is a noteworthy event. It becomes truly newsworthy when the car is a revered model, and the late-production Gullwing offered here is certainly deserving of that attention.According to a copy of its factory build sheet, and in consultation with 300 SL authority EricLeMoine, this Gullwing was built for export to the US. It was completed in mid-August 1956, finished in White (DB 50) with a red leather interior, and was optioned at the factory with a Becker Mexico radio.
The Gullwings first owner is thought to have been accomplished assistant director Roger M. Andrews of Los Angeles. From the mid-1940s to the late 1950s, Mr. Andrews was involved in the production of numerous westerns and early superhero films, including 1948™s Superman and 1949™s Batman and Robin. After Mr. Andrews™ passing in 1958, the Gullwing was acquired by Hollywood real estate developer L. Milton Wolf. Mr. Wolf is noted for having built one of Southern California™s most whimsical houses, perched high in the hills of the development known at the time as Hollywoodland. Constructed in the mid-1920s in the shadow of the famous Hollywood(land) sign, his three-acre domain, which he christened Wolf Lair, is still a landmark today. It was designed to be castle-like, featuring peaked windows and soaring gables; a fully furnished gatehouse that included a speakeasy; a turret-shaped room for Mr. Wolf™s pet gibbon, Missie; and a garage for his Gullwing. During Mr. Wolf™s ownership, the 300 SL was refinished in red and was fitted with twin Talbot fender mirrors. Following Mr. Wolf™s death in 1972, the Gullwing passed to a member of his family, and the car was listed in the 1970s and 1980s with the Gull Wing Group™s 300 SL club. The car™s file includes several invoices for routine mechanical maintenance and re-chroming of the bumpers in the mid-1980s. This Mercedes-Benz apparently was driven sparingly over the ensuing decades until it was permanently retired from the road around 2006. Having remained in the Wolf family for 60 years, it was acquired with the intention of re-selling earlier in 2018, showing just over 92,000 miles. In preparation for sale at the 2018 Gooding & Company Pebble Beach auction the Gullwing was entrusted to a factory-trained Mercedes-Benz specialist who set about returning it to running order. After carefully turning the engine over by hand, and servicing the oil, fuel, and cooling systems, the Gullwing roared to life for the first time in over a decade. Within minutes, the 300SL™s engine settled to a smooth and steady idle.
This Gullwing was found to be numbers-matching in all regards with the exception of the transmission, which is an updated 1960 300SL Roadster version, stamped 002946. Further inspection reveals an overall condition that one would expect of a respectfully used automobile that has benefited from the temperate climate of Southern California. Several light scuffs are outwardly evident on the body, and the interior has been redone in red vinyl with a bright red headliner, though it retains its white dash panel, per its original specification. A two-piece set of original Karl Baisch Gullwing luggage is in place behind the seats, the optional Becker Mexico radio is present, and gauges and exterior lights function properly. The Gullwing proudly displays the California black license plate that it has worn since the mid-1960s and retains an appropriate license frame from Hollywood Mercedes-Benz, which operated for many years in the heart of Hollywood™s business district. Additionally, the car™s manual set contains service stamps from Hollywood Mercedes-Benz that date from as early as December 1956. Sammy Rad, a Los Angeles based member of the Gull Wing Group and collector of classic Mercedes-Benz, acquired this Gullwing from the Gooding & Company auction in August of 2018 for $1,127,500 USD. Mr. Rad went about carefully stripping the red paint to reveal the original white factory finish underneath. He kept the car unrestored, but in excellent running condition to highlight its only original once condition.  It's not everyday that you find an unrestored Gullwing to either preserve or restore to your own desire and standards.
This Gullwing is a true survivor, still wearing much of its original paint and partial interior. The next caretaker could continue to run the car in this preservation state, or opt for a complete factory correct restoration. Our records indicate that just 11% of Gullwing production were originally painted DB 50, and fewer still with a striking red leather interior. 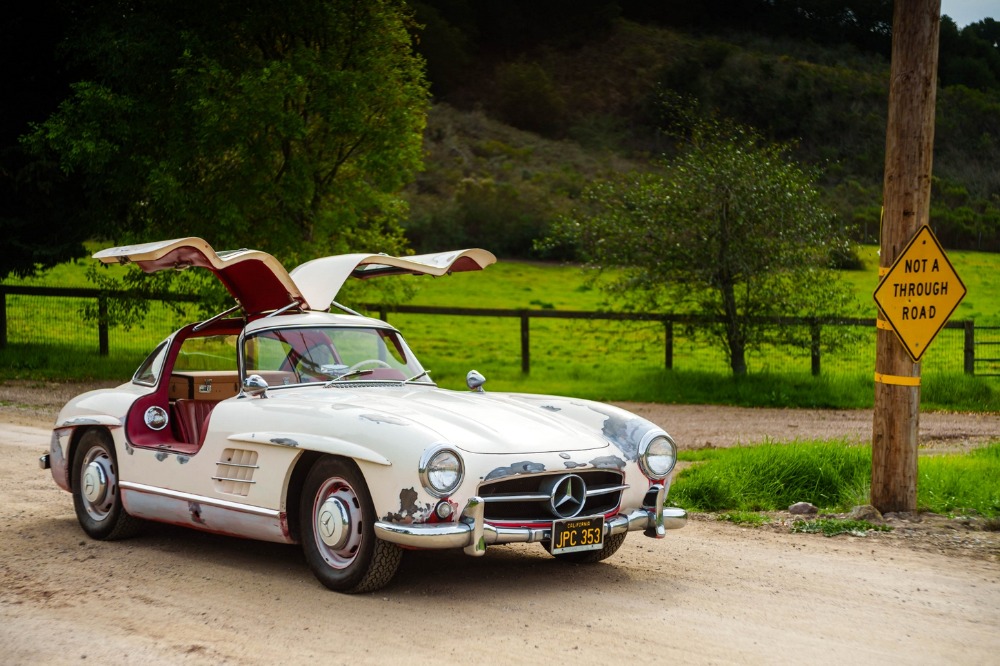 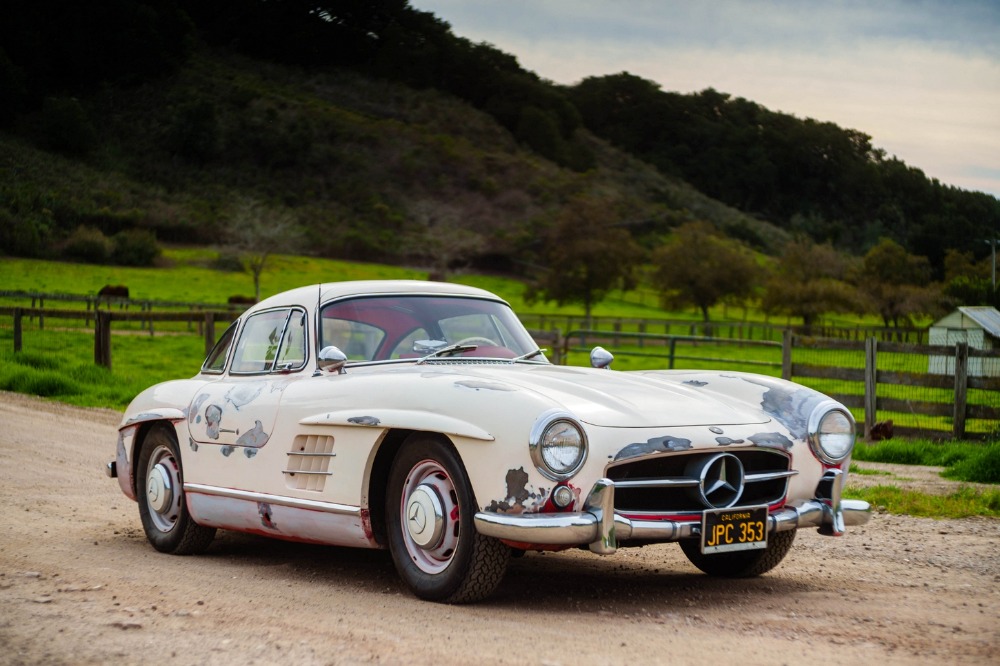 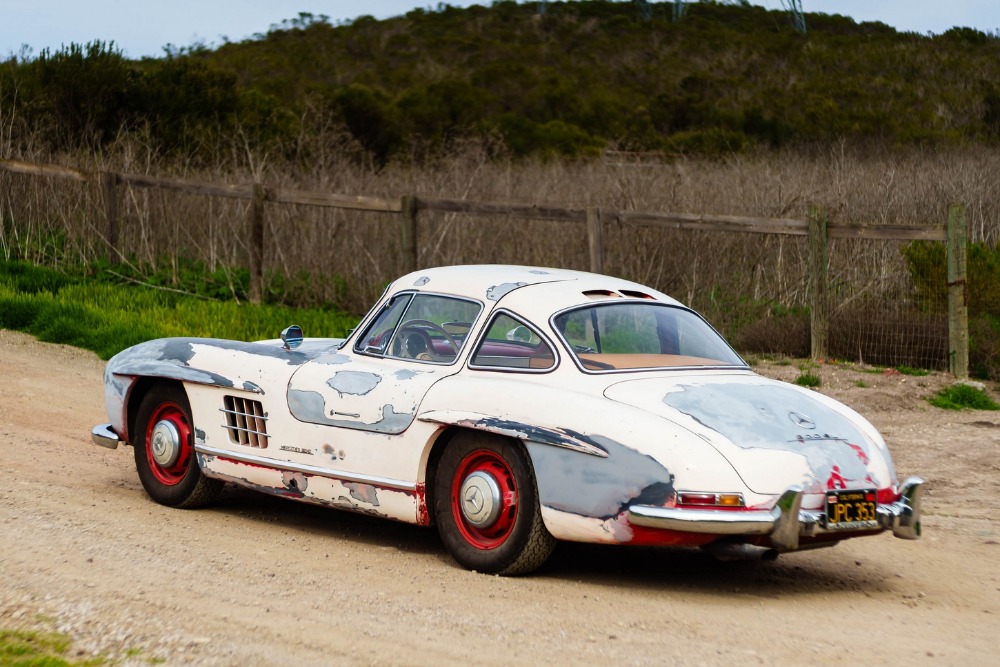 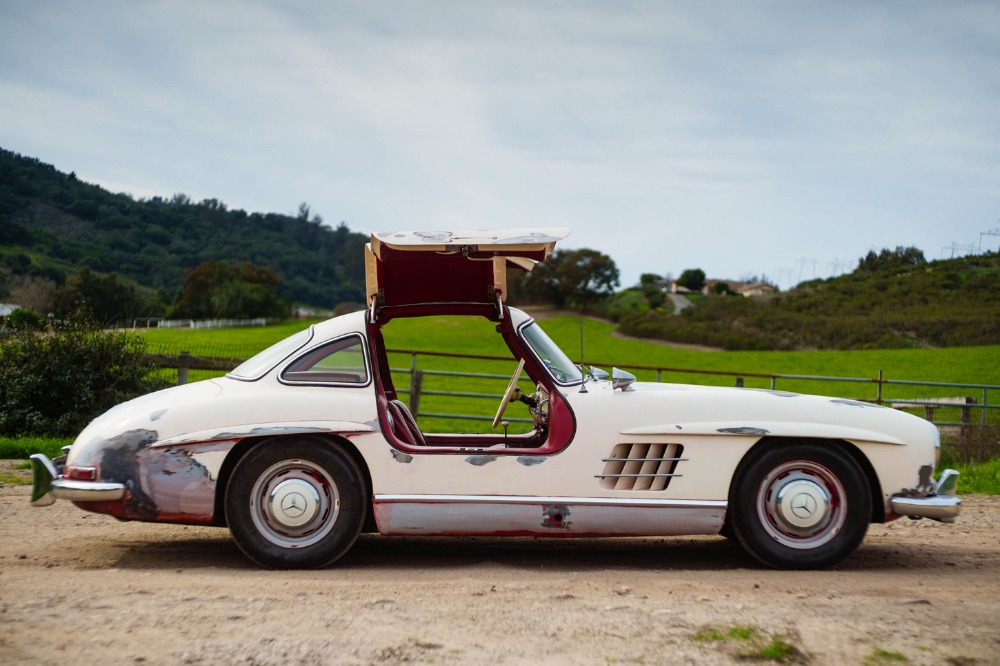 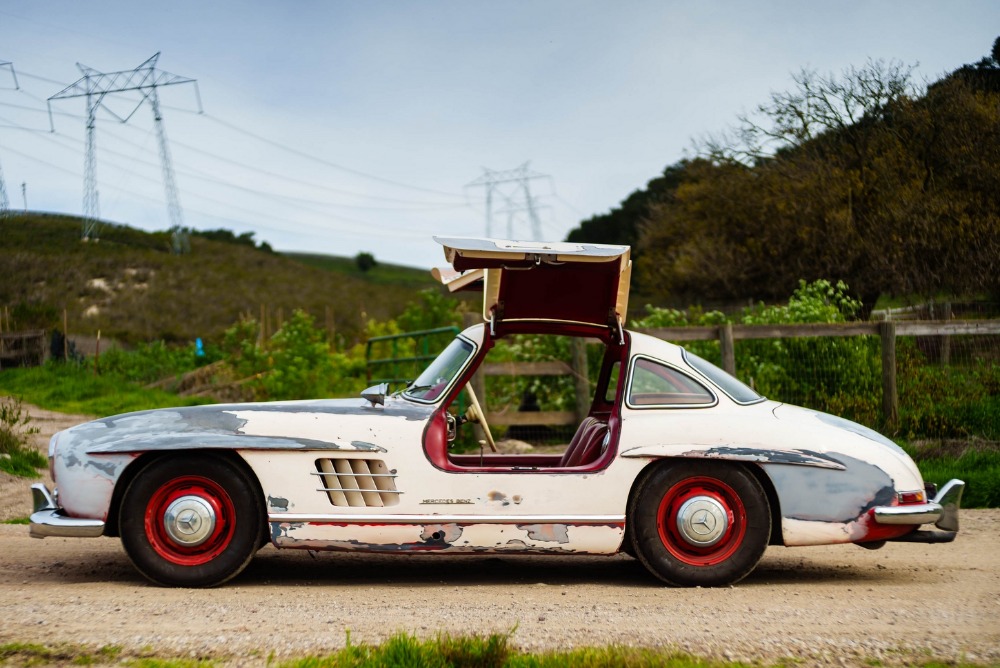 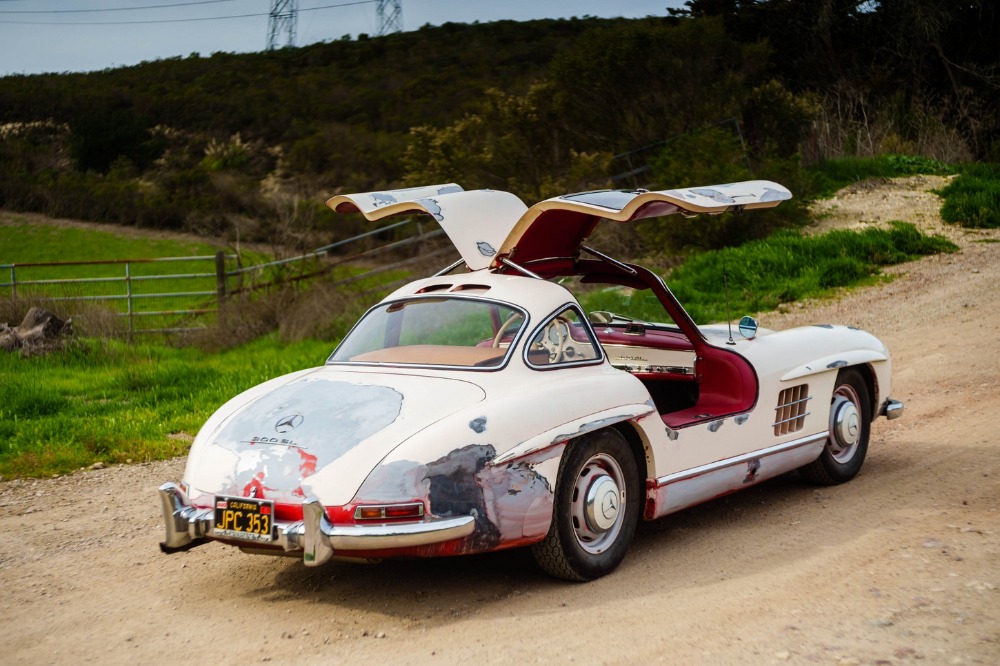 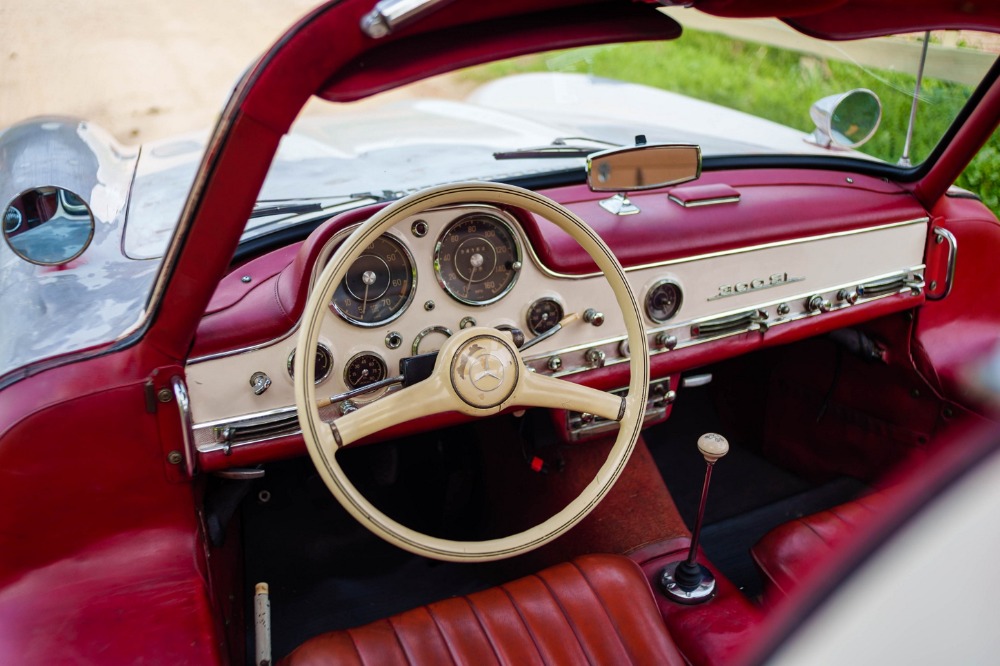 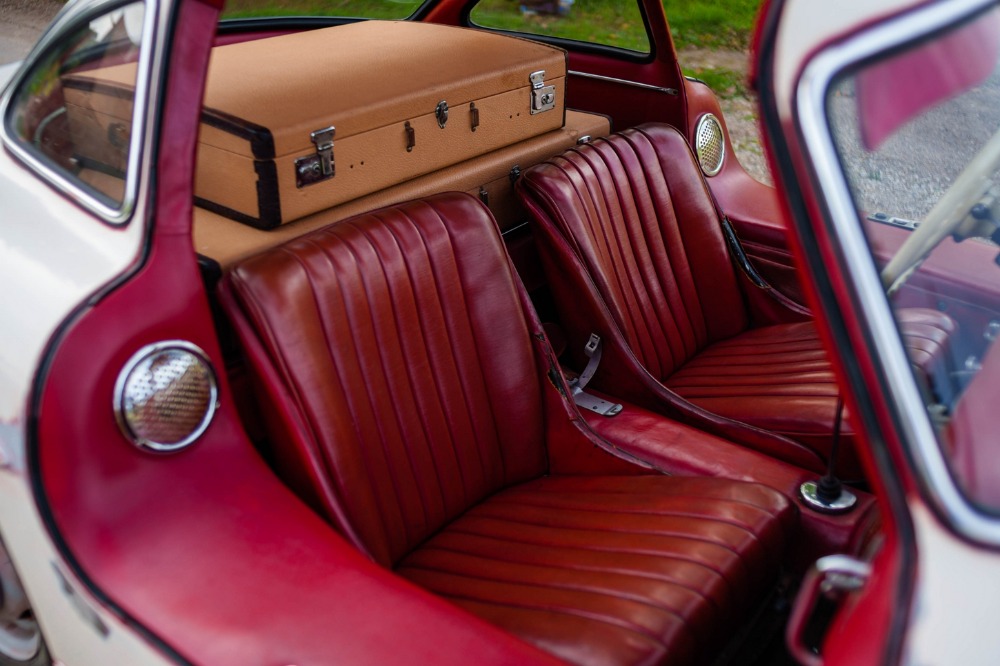